Research Inquiry and Process:
This production occurred in 2008 at the height of the housing crisis.
I was looking around my neighborhood and seeing house after house being deserted, all the contents being left in piles on the lawn.
This idea of lives being treated no better than refuse could not help but lead me back to the story of the Joads.
In creating the production, I determined that the entire play would be created from trash.   Cast members were asked to pick things up from the dump and garbage on their way to rehearsal.   We would then incorporate them into the show.
One of the most magical moments for me occurred during the rehearsal in which the cast created the Joad's truck.
There was, literally, a pile of trash in the middle of the floor.  I asked them to start singing Woody Guthrie's song "So Long It's Been Good To Know You" and to somehow assemble a truck.
In the pile there was a car door, but it didn't become a car door, it became the front window.
A ladder stretched long ways became the side of the truck with windows to look through.
Two mason jars set on top of old rusty car jacks became the headlights.
And it went on and on.   The ensemble's creativity was beautiful to watch.
We also used no recorded sound in the show.  All sound was generated by the cast using found objects.
The noise of the car running was created by old cheese graters, flour sifters, and coffee grinders.
The rainstorm was created by the cast members clicking their fingers and then eventually stomping their feet.
​It was magical.  This is a production I will always remember. 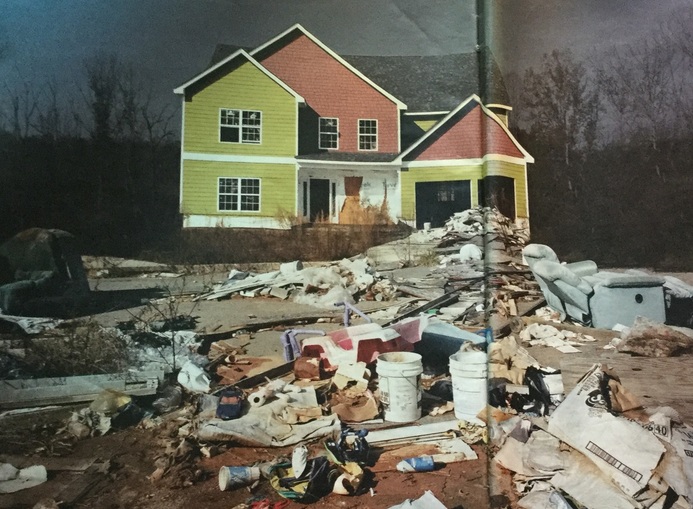 Director’s Notes
The Journey of the Joad Family in The Grapes of Wrath resonates beyond the year 1939 when it was first published and, like the Dust Storms that shaped the Joads’ fate, continues to swirl around America’s collective consciousness.  It represents the American Dream turned to the American Nightmare as the Joads’ displacement urges them to move forward and scrabble a life from what they find along the Road.  In Steinbeck’s Their Blood is Strong, (a pamphlet created from articles he wrote for the San Francisco Examiner which would served as the basis for The Grapes of Wrath), he described the Hooverville camps as looking “like city dumps”.  They were built of dirty cogs, scrap iron, weeds, flattened cans, old crates, cardboard, and any other refuse that could be recycled to aid in the squatters’ survival.   The Joads themselves are often regarded as human refuse as they are consistently shoved out and thrown away.  This sense of scavenging and dispossession served as the ideal inspiration for how this ensemble of actors would explore presenting this classic American epic.   Because this is one of the theatre department’s  “no budget-studio” productions I challenged the cast to begin collecting old castaway items and bringing them to rehearsal.  They rose to the challenge---raiding their family’s attics, barns, cellars, and closets.   In the end, just as the Joads pieced their lives together from the scraps they found on the road, we pieced together the telling of their story from the scraps we found along our creative journey.

The story is now over 70 years old but the themes of Displacement, Foreclosure, Undocumented Labor, Joblessness, Over-Industrialization of Farming, Abuse of the Land, Poverty, and the Splintering of the Family are currently playing out in our country all over again.  And we are again paying the price for our overzealous attempt to create an Eden in America while actually destroying the Earth, Air, and Water of our Paradise.   It is no surprise that the Elements play such key roles in this story.  Through having them travel down Route 66, Steinbeck forces the family to face the elements and realign themselves with America’s physical and psychological landscape.  The Joads, after losing everything, begin to question the nation’s destructive values as they discover that true compassion is built on reciprocity and a moral obligation to aid others……what Steinbeck calls the “Got To’s”.   Each scene becomes a parable as the Joads learn that humans are most fulfilled and at their ethical best when they  “got to” help one another.   Indeed, Steinbeck’s unforgettable final image in the piece forces us to confront the extent of our own compassion.
In the last few years we have seen natural disasters displace millions, politicians rage against the “socialism” of universal health care, families lose their homes to foreclosure, jobs vanishing every day……The Joads are no longer literary archetypes…they have moved in next door to you..….they are your neighbors, your parents, your uncles, your children.   Even after working for six weeks on this show and wanting desperately to believe in the glimmer of hope it provides in its final tableau; I still find it difficult to accept that we are reaching our human potential when so many are currently suffering in this country and abroad.  I wonder if Mankind will ever learn… or if we are doomed as the Family of Man to forever ride down the Road of Life in search of a place where all can feel secure, safe, and welcome.   I try to listen to the comforting spirit of the Great Earth Mother as she speaks through Ma reminding us that  “We are the people”---The Family is All of Us.

Can we ever believe that?

​Steinbeck’s answer seems clear, “We Got To”. 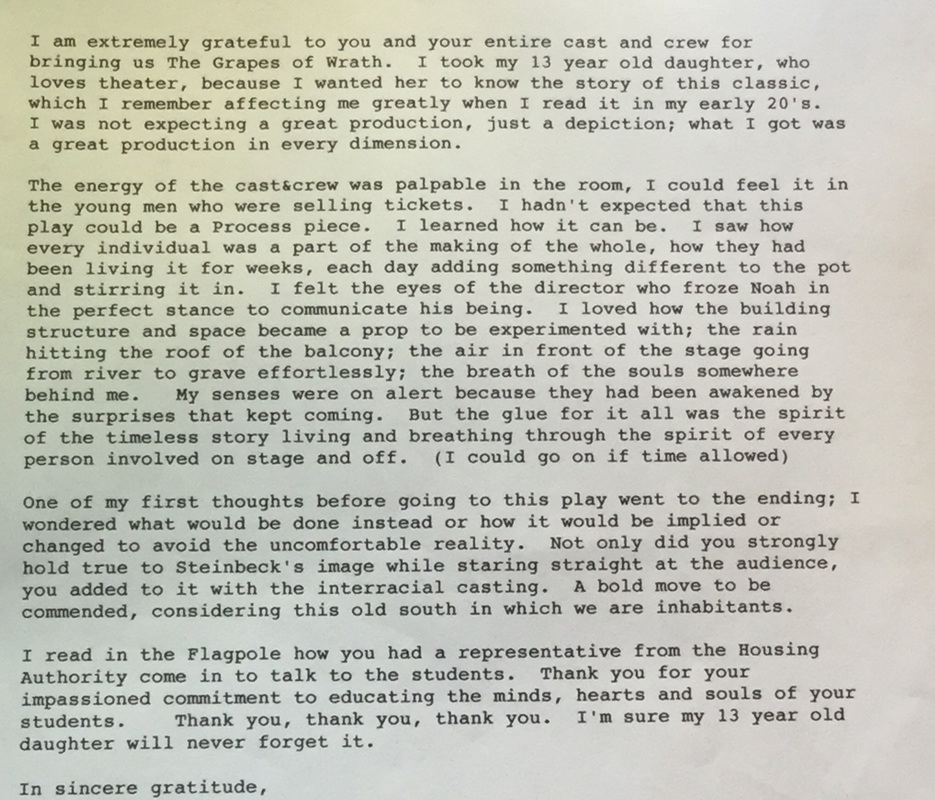 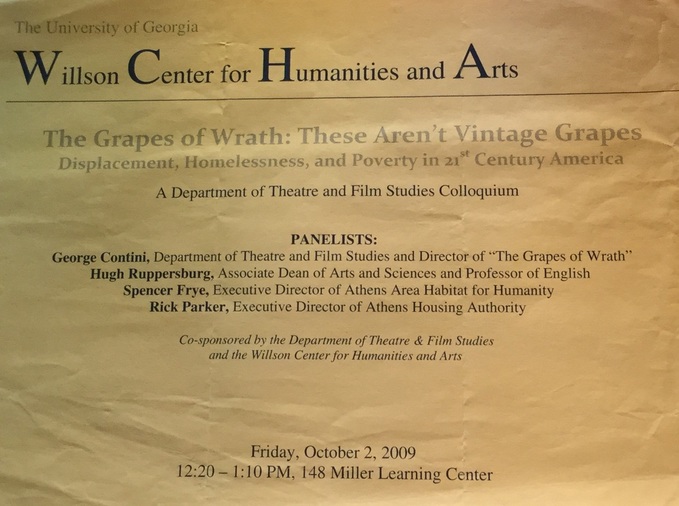 Post Show Study/Discussion Questions:
1.This production of the Grapes of Wrath was created using only items that have been thrown away. Why do you think the director chose to do that?
2.What themes or issues do you see the Joad Family dealing with that are still relevant today?
3.Do any of the characters in the play remind you of someone in your family or someone you know? Why?
4.Is there any character that you relate to personally? Why?
5.What were some of your favorite images in the play? Why?
6.What were some of the ways the cast used props in an imaginative way to tell the story?
7.Who was your favorite character? Why?
8.If you had to pack up and leave everything behind and could only take three items with you to help you survive…what would they be? (Cellphones, blackberries, and computers aren’t allowed because there would be no electricity)

Ideas for Lesson Planshttp://lcweb2.loc.gov/cgi-bin/ampage?collId=afcts&fileName=sb001/sb001.db&recNum=20
Ask the students to create their own flyer from the perspective of the workers returning from
California
Websites for Further Information