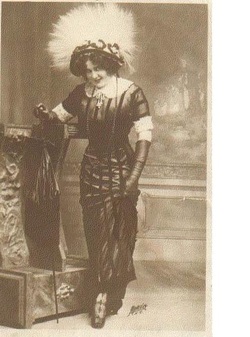 Actor George Contini brings to life the forgotten legend Female Impersonator Julian Eltinge.  Facing debt and obscurity, an aging Eltinge recalls his fame in Vaudeville, Broadway, and Silent Film while the world begins to view him more as a Perversion than an Artist.  Presenting the first re-creation of Eltinge’s stage routines and rare archival footage, this multi media performance examines the dark fluidity of Eltinge’s sexual persona and its ability to ultimately offer him salvation.

1939, backstage at the Rendezvous Club in Los Angeles.

Julian Eltinge (real name Bill Dalton) is grasping at the vestiges of a vanishing career.  Times have changed with the advent of war, female impersonation is no longer seen as a talent, but a perversion.  Jobs are hard to come by.  He has lost all his money through bad investments. Forced to take at a job at a notorious club whose clientele is mostly homosexual Eltinge is at the end of his rope.  To add further insult, a recent "anti-homosexual" ordinance passed in Los Angeles forbids men to wear clothing of the opposite sex in public.  Once the highest paid performer in the United States and considered to be so beautiful he had his own line of women's beauty products; Eltinge is now ironically forbidden to wear his dresses for an engagement paying a mere $200—money he needs desperately.   Herb Sterne, a reporter for Script Magazine, happens to be in the audience and comes backstage to interview Mr. Eltinge.  Julian, while anxiously waiting to see if a dispensation will be granted by the Police Commissioner to allow him to perform in his gowns, relates his life story to Sterne by showing off his scrapbooks of clippings.   Eltinge traces his career from his first performance impersonating a young girl as a teenager for the Boston Cadet Academy, through his years breaking into vaudeville, to his years of international fame with such shows as "The Fascinating Widow, to his glamorous life in Hollywood, as well as to his eventual decline into alcoholism, debt and obscurity.  In the end, Julian still prohibited from performing in drag at the Rendezvous, ingeniously rolls his costumes out on stage on a clothes rack and describes how he looked in each of them as he recreates his signature songs for the unenthusiastic audience.