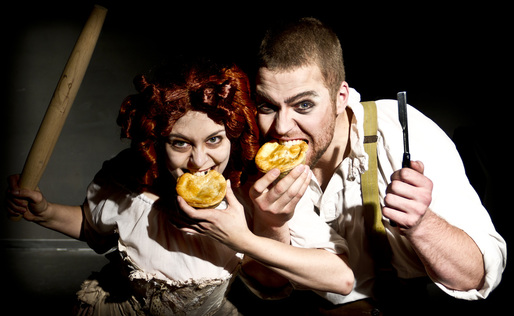 Didn’t somebody once say “Revenge is served best as a dish”?

We’ve all fantasized about revenge on those who have wronged us, and I know the majority of us have at least had the satisfaction of flipping the finger to a reckless driver at some point in our lives.  With that simple act, we understand the basics of retribution.   But Sweeney and Mrs. Lovett go the extra mile and become demonic eco-warriors urging us to “Eat Locals”.  They recognize that men devour men every day through dealings in business, politics, legal affairs, religion, and other social institutions.   In setting up their ghastly shop, our blood soaked protagonists remind themselves that it’s “The history of the world my dear, So who are we to deny it in here?”

The original Penny Dreadful story that introduced the character of Sweeney Todd came out in a pre- industrial London and its audience was intended to be teenage men looking for a quick melodramatic thrill.    It’s no coincidence that this same age demographic is shared by today’s slasher movie audience.     Sweeney Todd is a predecessor to Freddie and Jason; a warning and a reminder --Do we all have a Sweeney lurking somewhere inside us?

Currently, Revenge swirls around us in the modern world.    We view bad reality show actors who pose as politicians and threaten retaliation toward “enemies of the state”, we witness horrific religious vendettas posted on YouTube, we hear of legal reparations for deeds done in the past, we learn of yet another mass shooting that is meant to settle some score.    We seem to exist in an endless state of “It’s payback time” where those who feel powerless seek a warped sense of strength through their violent rage.

Sweeney Todd inhabits that world as well.   It is a world in which the sun never seems to shine.    It is forever gray with slashes of blood red.   The atmosphere seems to mirror the troubled and warped personalities of the people who inhabit it, where the very foundation on which they walk seems as twisted and unstable as their lives.   It seems otherworldly to us, yet also, far too familiar.    Sondheim’s brilliant musical melodrama reminds us that there are still Sweeneys everywhere.    They may not be selling their victims as haute cuisine, but they are eating away at mankind nonetheless.    Will their hunger ever be satisfied?

​Are you on the menu?
Or are you serving it up?

"We'll Serve Anyone, Meaning Anyone!"

Sweeney Todd, offered an interesting way to involve the local community.
I established a cross promotion with a local business Pouch Pies, who created and sold a number of special “Sweeney Todd Meat Pies” at their restaurant during the run of the show , as well as in the lobby of the theatre during each performance.
Some of the pies were based on lyrics from the show.  There was The General Pie (with his Privates) and the Shepherd's Pie (with Actual Shepherd).
But the folks at Pouch also came up with the deliciously clever Kate and Sydney (Steak and Kidney) and The One That Got Away (Vegetarian).
Audiences loved it and the smell of pies wafting through the theatre only added to the atmosphere! 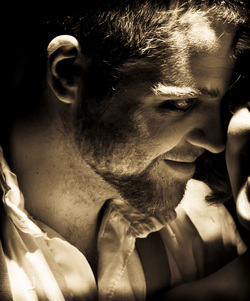