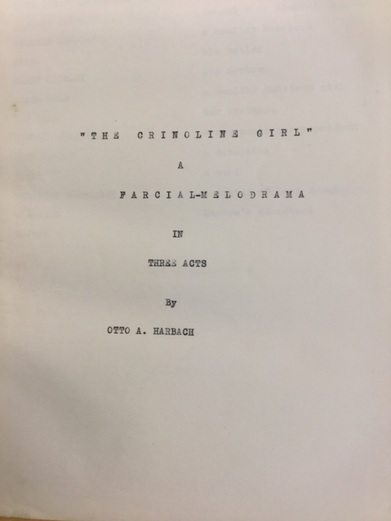 ​In 2016 I was awarded the Willson Center Sr. Faculty Research Award and the M.G. Michael Award  to research and restore the original script and score of the forgotten early twentieth century musical The Crinoline Girl: A Farcical Melodramatic Comedy with Songs.  The eventual goal is to mount a full-scale recreation of this lost American musical with that production being the keynote event of a conference on Gender and Performance to be held here at UGA.  A book publication would be another obvious outcome; allowing me to publish not just the script and score to The Crinoline Girl, but also the script to Man/Actress, my solo show about early twentieth century performer Julian Eltinge, for whom the show was written.  This theatre piece will be a significant contribution to our knowledge of American Theatre History, the American Musical Theatre Canon, and the presentation of Gender in the early 20th Century theatre.

My initial archival research into Eltinge which led to the creation of Put It In the Scrapbook, as satisfying research often does, presented new questions and opportunities that I wish to further explore. I came across a number of original manuscripts and the sheet music from the Broadway shows written especially as showcases for Eltinge's talents.  None of these plays has ever been revived or given another performance past their initial run on Broadway over 100 years ago.   One of these scripts for a musical farce entitled The Crinoline Girl seemed to be incomplete.  As I began to search I discovered Act Two and Three of this play at the Ransom Center in Austin and Act One in the New York Library Theatre Archive.  In addition, I've come into possession of all the sheet music of the songs used in the show and original programs that list the order of the songs as used in the original production.  The songs were written by Eltinge himself and famed Tin Pan Alley composer Percy Wenrich (known for such standards as Moonlight Bay.)

Through dogged pursuit on Ebay and other sources of theatrical ephemera I've obtained some press photographs of the original production giving a glimpse of the period, characters, look, and feel of this truly "lost" performance.  No copyright is held on the script and songs as they are in the public domain.   In order to complete this research I have visited the New York Billy Rose Theatre Archives and the New York Library of the Performing Arts to dig deeper into boxes I was able to merely skim the surface of before. As with many theatrical manuscripts, there is often a "shorthand" written in the margins regarding specific action or comic bits that the actors had fleshed out.   My research would also take me to the Library of Congress as it is the only place that holds the sole surviving records of scripts or outlines of Eltinge's films.  Eltinge was known for specific comic routines; these would give great insight into deciphering that "shorthand" and in recreating comic bits as seen in the original production.   I have been unable to find any orchestrations or underscoring that was used in the original production; but where such music occurs is clearly marked in the script.  This will require substantial work with a composer and musical director to help with the task of recreating those compositions.

Following the research, scripting, writing, and scoring, which this grant will fund; I will be seeking other funding, both external and internal, to mount a production at the appropriately historic early Vaudevillian Morton Theatre here in Athens.    That production would be filmed and documented through various media platforms.  The cast would be comprised of UGA students and possibly a Guest Artist for the lead role.   In addition, other funding will be sought to hold an International Conference on Gender and Performance at UGA in conjunction with the performance.  This will involve UGA faculty and guest lecturers from the areas of Theatre, Women's Studies, and Music.  Finally, it is also hoped that this work will result in a publication of the annotated script.   I believe this particular project takes advantage of, and will serve as an excellent showcase for all levels of work that are being done in the UGA Department of Theatre and Film Studies and as an excellent example of artistic scholarship.
​
For future funding I will be looking to both internal UGA grants from the Willson Center and OVPR as well as seeking external grants from agencies such as Mellon Foundation Franklin Fellows, Creative Capital, Arch and Bruce Brown Foundation, Awesome Foundation, New York Public Library Archive Fellowship, and Ransom Center Fellowships.